I hate (my ex) for what he or she says and does!

I’m honestly convinced that I should have studied psychology before I got divorced. And the reason is that I think my life would have been easier.

Why is it not a confident “Yes”, or even if you’re not sure, something like “I’m not actually sure I could do that, but I’ll try and give it my best shot.” You know all these, try, try, try, was just so negative. And through many years of self-development and understanding myself better and all that, I came to understand why people say things like that. So one thing that I learned was- when someone says “I’ll try” or “It should be OK”, it means that they’re not confident. They’re not confident about that task, they’re not confident that they can succeed at it, so they may not even try or put their full focus or all their efforts into it because they just don’t think they’ll be able to do it anyhow.I think I would have understood things better. I would have gone through less trial and errors. And life would have been more peaceful post-divorce. And the one main area that I will never forget and certainly still lingers around a little bit is, when I was married, my ex used to always say, when I ask him to do something or anything like that, his answer was always, “I’ll try” or “It should be OK” or “I don’t see why not, but I’m not quite sure”. And I used to cringe at the thought why is he always saying a positive-negative response?

Can you love and hate someone at the same time? hmmm…

When you’re divorced, you’re in polar opposite ends of the world- kind of in a boxing ring where two opponents are staring each other down, getting ready to fight it out, right? So you have to understand that you should not try to have the same outcomes as you had when you were married. So when I finally understood that I can’t have that, I started to change the ways I was thinking, the ways I was looking at it. When I was negotiating with him, or talking with him, and when I heard the words “I’ll try” or “It should be OK”, I understood that it’s not going to get done. And therefore I did not put my hopes up that that thing was going to get done, and I said “I’m not setting up myself for failure therefore I’m going to have to look for another outcome or look for another proposal that makes sense where the answer is going to be a yes”. And until I get a “Yes”, I have to know and understand that it will most likely not get done.

My healing from divorce felt REAL …

When I started to think that way, my life changed because I wasn’t worried anymore, I wasn’t fighting over the same thing over and over again. Why? Because I wasn’t going for the answers of “I’ll try” I wasn’t accepting those. I was looking for a different, alternate solution. Why? Because it took me many years and many gray hairs and a lot of heartache and pain to learn these lessons. And I don’t think that you should have to go through all that.

Divorce by Rose is a Community app that brings together two communities: the parents contemplating divorce and newly separated, with experts, coaches and professionals who have the tools, the strategies, the wisdom, to share with the parents. So ultimately the whole idea is to bring the two worlds together because we want to help you learn, grow, evolve, transform and get the answers you’re looking for NOW, so you can have an easier and better post-divorce life.

As our Founder, Ravit Rose, always says “We don’t know how to marry and we certainly don’t know how to divorce either” and for this reason, we need to carefully and logically plan your divorce, get your divorce finances & budget in order and learn the 5 key strategies to avoid a nasty divorce.

Divorce tip: be careful of these typical mistakes that only lead you down the rabbit hole

You will be looking for sympathy and empathy and will likely desire all the attention you can get. While you do so, you will not realize that you will become the master of the art of storytelling. Our Founder, Ravit Rose, also shares her experience on how she really wrong about her divorce. Hearing other people’s stories from a neutral standpont can positively impact your life IF you keep an open mind. 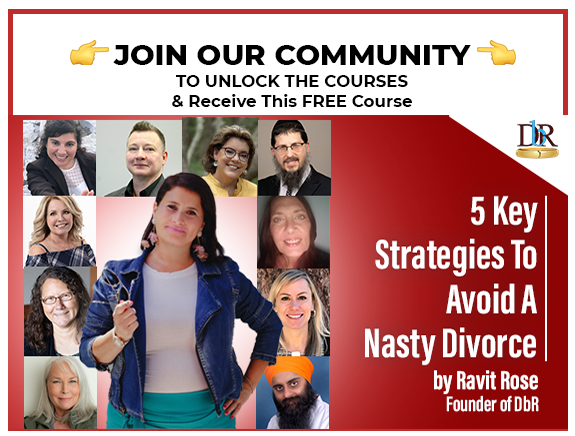